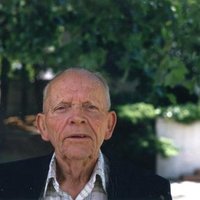 Derrick Henry Lehmer (1905 - 1991) was known to his colleagues as DHL to distinguish him from his father, Derrick Norman Lehmer who was also a mathematician, and by his friends as Dick. In this article Derrick or Lehmer means the son, DNL means the father.

Lehmer was born in Berkeley, California where his father was Professor of Mathematics at the University of California, Berkeley. He was interested in mathematics from an early age and even before graduating was working with his father on the production of factor stencils. In the days before computers factorising large numbers was a laborious task and many methods had been tried to make it easier. Factor stencils were cards with holes punched in them, and Lehmer described their use as follows:

One of DNL's maths students, a Russian girl called Emma Trotskaia from Samara (later renamed Kuybyshev) on the Volga river was also helping to make factor stencils, and in 1928, shortly after Emma received her Bachelor's degree in mathematics they married and were to become one of the most famous and productive husband and wife teams in mathematics. The factor stencils they worked on for Derrick's father enabled them to find factors for all integers up to 489112, and these factorisations were published in a book in 1929. That such books are now obsolete is in part due to Derrick Lehmer. He was one of the first to appreciate the benefits of computers for computational mathematics and whilst working at the Aberdeen Proving Ground on ballistics trajectories he wrote one of the first number sieves to be run on a computer. He had previously built an automatic number sieve from a small electric motor and some bicycle chains hanging from sprockets attached to a shaft. This was capable of running unattended, only stopping when a solution was found. A replica of this can now be found at the Computer Museum in Boston, Massachusetts. He had also displayed at the 1933 World's Fair in Chicago a photoelectric sieve that became operational that year.

The year after the book was published, Lehmer published an improvement to the Lucas primality test for Mersenne primes [math]\displaystyle{ 2^p{-}1 }[/math], extending its application to all odd prime exponents p, and enabling him to add his name to the test so that it is now known as the Lucas-Lehmer test.

His work took in a wide variety of mathematical topics, always taking a more computational or practical rather than a deeply theoretic approach. "When I was young," he said, "mathematicians still had a slight feeling of guilt about a proof that establishes only the existence of a solution of a problem, without supplying a constructive procedure for finding a solution. Many times I was told that the existence of a proof was only the first step and, now that the solution is known to exist, very soon some, presumably more pure, mathematician would come up with a constructive solution. In almost all cases, I am still waiting for the second man."

In collaboration with Ralph Ernest Powers he presented a new factoring algorithm that led to the development of the continued fraction method of factoring by Michael A. Morrison and John Brillhart, a 1970 computer implementation of which factored the seventh Fermat number in 45 minutes. He extended Lucas work on the divisibility properties of what are called Lucas Sequences to a special type of fourth order sequence, and this work was sufficiently influential that the terms in this sequence are now called 'Lehmer Numbers'. He also clarified and extended Lucas' use of the Fermat congruence in primality testing, making its use widely known and in a paper with John L. Selfridge and John Brillhart carried this topic a great deal farther.

His work on the density of primes having a given primitive root g follows from Artin's conjecture that this density would be the same (about 3/8) regardless of the chosen value of g. Lehmer presented data to contradict this conjecture, especially for small primes, and Christopher Hooley later showed that this follows from the Generalised Rhiemann Hypothesis. Lehmer later extended this heuristic approach to the densities of prime values of quadratic polynomials that have a certain g as primitive root, in this case presenting examples with high densities. He wrote five papers on the partition function [math]\displaystyle{ p(n) }[/math] dealing with two cases of the Ramanujan conjecture, that [math]\displaystyle{ 5^4 | p(599) }[/math] and [math]\displaystyle{ 11^3 | p(721) }[/math], computing the values using the Hardy-Ramanujan series and verifying the conjecture. Almost incidental to this work, he also showed that contrary to the then current opinion the series diverges.

As a teacher he was appreciated for his practical approach to mathematics and particularly the computational and programming aspects that came to the fore during his lifetime. As a thinker he was original and independent, avoiding dogma and ritual in favour of wit and wisdom, and left his graduate students largely to themselves, conferring only to confirm their progress. Both he and his wife, Emma, were well known for their knowledge, courtesy and sociability and are remembered each year when the West Coast Number Theory Conference they founded in 1969 convenes each December.

In 1940, Lehmer accepted a post as Professor of Mathematics at the University of California, Berkeley, and so returned home to take up his father's old chair. He remained there with few interruptions until 1972 when he became emeritus professor. He passed away quietly at home on 22nd May 1991. He is survived by his wife, Emma, a son and daughter, four grandchildren, two great-grandchildren and an older sister.